chaires 1Continental law is the most widespread legal system in the world. It alone rules two-thirds of the global economies and population. However, legal professionals who follow this system have visibility 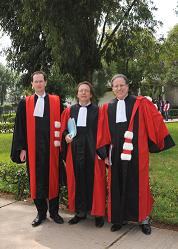 limited global view on what unites them and on the specific exchanges of continental law. Education is the way to increase the awareness of future professionals on the convergence of continental law systems. Spreading this knowledge allows for a balance in the different legal families.

The Chair’s primary goal is to promote the culture of continental law through the development of mutual discovery between the legal professionals in the host country and in the visiting faculty.

This exchange takes place initially in academia, in order to form a place for joint reflection and action. Subsequently, it is intended to expand to other professions.

Holders of the Chair are invited to write an end of mission report and publish it in national and international journals. They are solicited for public lectures and press conferences or assessments on the Chair.

The creation of a Chair of law abroad makes it possible to pursue a third goal. It aims to consolidate a cooperation network between continental law legal professionals, which can be used to support joint projects. This is already the case with the first Chairs, which allow the Fondation to join the reform of contract law in Asia and Latin America.

Creating a network and a community that bring together legal professionals educated in continental law. 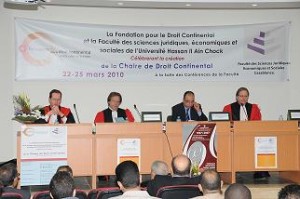 Involvement in local and regional projects.

The action can be sustained by the establishment of a documentary collection.

The network consists of continental law Chairs. It is currently present in Japan, Chile, Brazil, Vietnam, Morocco and Colombia.

The operation is renewed annually.

Increasing the number of Chairs around the world.

Developing the collaboration and exchanges of professionals in joint projects such as the establishment of regional laws or charters on arbitration.

Ultimately, establishing a permanent Chair, and developing a long-term partnership.

The potential for visibility is important insofar as there is a considerable pool of foreign legal professionals who find a real interest in using the network to develop their exchanges, as the scientific output allows for a wide distribution, and as the audience tends to diversify.