Since 2008, the Fondation supports the project for the development of a common frame of reference in the field of European contract law.

In April 2008, the development in partnership with Professor Catala and the Association Henri Capitant, of a conference in the Senate on the subject of “International acceptance of the preliminary draft on the obligations law reform.” 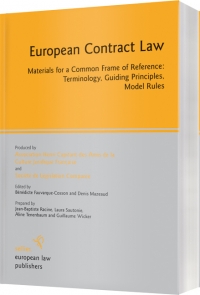 In 2008, support for the English translation of legal literature published by the Association Henri Capitant, and from the Comparative Law Association in Paris. The books are published in French and entitled “Terminologie contractuelle commune [Common Contractual Terminology]” and “Principes contractuels communs [Common Contractual Principles]”.See the conference program (in french)

In August 2008, in response to a request by the Chancellery to Professor Ghestin, the Fondation provided support for the French translation of the first three books of the Draft Common Frame of Reference edited by Professors Christian Von Bar, Eric Clive and Hans Schulte-N. 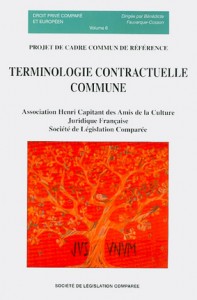 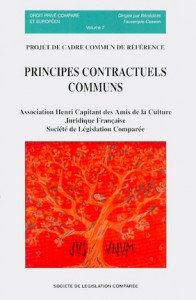 In 2010, The Foundation wanted its “response” to express the diversity of civil law, and thus its wealth, in Europe and outside of Europe.

Its response has two parts, in part one the French response and in part two the Colombian, Italian, Louisiana and Quebecois responses.

The first part reflects the difficulty in developing European Law, which, according to the continental tradition, is a written law, legislated and even codified, but is also “well-written” law, that is to say clear and accessible and also respectful of national traditions, to the fullest extent consistent with an undertaking to harmonize them. The difficulty – why deny it – is tremendous. Only a strong political will – which has always driven the great legislators, and even more so the codifiers – can overcome it. Without the will of a Europe that is united, not only on the defense of the Euro, but also on that of social justice, the undertaking to harmonize European law risks enduring stagnation.

The second part reflects that the undertaking to harmonize European Law is perceived differently, not only within Europe but also beyond. We note with interest the differing views that come to us from Quebec and Louisiana on what would be the best instrument to develop European contract law. However, there is complete agreement between these two civil law “countries” surrounded by a universe of common law in rebutting any analogy with the experience of the Uniform Commercial Code of the United States. This rebuttal is well worth pondering…