Bu Qingxiu: “The Development and the Design of the Derivative Action in Selected Jurisdictions”
Li Bin: “The Protection of Property in China: Transformation of Internal Law and the Influence of International Law”
Olivier Beydon: “Transplantation and Chinese Influence on the Legal System of Trademarks in China”
Yang Caixia: “The Validity of the Arbitration Clause in International Trade”

A jury composed of:

– Mr. Shi Jiayou, Professor at the Faculty of Law and Vice-Director of the International Relations Service, Renmin University (People’s University of China)

– Mr. Gérard Tavernier, Honorary Avocat, Former Chairman of Gide Loyrette Nouel and member of the Initiative’s Board of Directors,

and presided by Professor Michel Grimaldi, awarded the Foundation’s first thesis prize to Mr. LI Bin, for his thesis on “The Protection of Ownership in China – Transformation of National Law and the Influence of International Law”. The awards ceremony was held at the Embassy of France in Beijing on 14 October 2010, with his Excellency the Ambassador presiding. 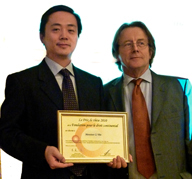 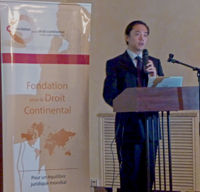