– Mr. Shi Jiayou, Professor at the Faculty of Law and Vice-Director of the International Relations Service Renmin University (People’s University of China)

– Mr. Gérard Tavernier, Honorary Lawyer, Former Chairman of Gide Loyrette Nouel and member of the Fondation’s Board of Directors,

– Mrs. Stéphanie Balme, Researcher in Political Sciences transferred to Beijing, Visiting Professor at the School of Law of Tsinghua University,

– Mr. LI Bin, Professor at the Faculty of Law of the Harbin Institute of Technology, member of the Scientific Council of the Fondation,

and chaired by Professor Michel Grimaldi, who presented the PhD award of the Foundation to :

– M. Rongxin ZENG for his thesis on “Comparative security interests in French law and Chinese law”

– M. Wei HOU for his thesis on “Freedom of contracts in carriage of goods by sea”.

The ceremony was held on 17 October in the Consulate of Shanghai in the presence of M. Michel Mercier, Minister of Justice and of Liberties and Mr. Emmanuel Lenain, Consul General. 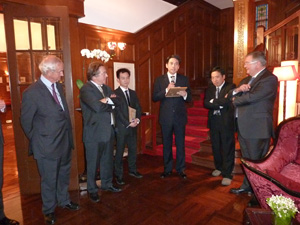 Is Professor Michel Grimaldi who presented the award to the two winners of the thesis in the presence of two members of the jury, Mr Shi Jiayou and Mr Gérard Tavernier and Mrs Nicole Souletie, Finance and administration officer of the Foundation for Continental Law. 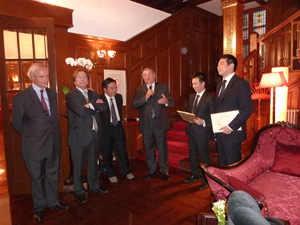